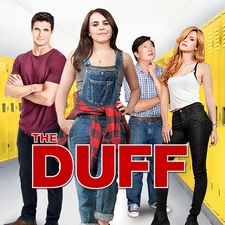 Thoroughly enjoyable teen comedy more reminiscent of the 80s than the current era.

Bianca is enjoying her senior year of high school in the suburbs of Atlanta, Georgia, with her two best friends, Jess and Casey, both of whom are significantly more popular than she is. She is also the neighbor and former childhood friend of Wesley, a star on the school’s football team, with whom she had fallen out during high school. She has a crush on guitar-playing Toby, and reluctantly attends a party hosted by mean-girl Madison, hoping to talk to him. The party turns out to be a disaster for her, as it’s there that Wesley unthinkingly reveals to her that she is the DUFF of her friend group; the Designated Ugly Fat Friend. The DUFF does not actually have to be ugly or fat, he explains, it’s just the person in a social group who is less popular and more accessible than the others in the group. People exploit the DUFF to get to the popular people.

Bianca is insulted and devastated, but she soon realizes Wesley is right. The students in her high school are only interested in her as a way to get to Jess and Casey. She takes her anger out on Jess and Casey and “unfriends” them on social media and in person.

Bianca later overhears Wesley’s science teacher Mr. Fillmore telling Wesley that unless he passes the midterm, he’s off the football team, which could cost him his football scholarship. Desperate to change her social standing and go on a date with Toby, Bianca strikes a deal with Wesley—she’ll help him pass science if he’ll advise her how to stop being a DUFF. They have a fun time at a mall, attempting a makeover by buying new clothes. This backfires when Madison’s minion records Bianca playing around in her new clothes and pretending that a mannequin is Toby. They create a video ridiculing Bianca and post it online leading to the entire school mocking her. It also becomes clear that Madison (a reality-TV wannabe) feels possessive of Wesley, her on-again off-again boyfriend, and is jealous of Bianca’s relationship with him.

Wesley tells Bianca not to let the video destroy her. Instead, he suggests she own it and just be upfront with Toby by talking directly to him and asking him out. When Bianca sees Toby at school, she does ask him, and to her surprise he accepts. When Wesley becomes frustrated by the constant arguing between his parents, Bianca takes him to her favorite spot in the forest, her “think rock,” to help him cope with a possible divorce. They kiss, but joke about it and pretend it didn’t mean anything. At Bianca and Toby’s date at his house, she finds herself thinking about Wesley, but tries to brush it off. She ultimately discovers that Toby is “Duffing” her—spending time with her in order to connect with Jess and Casey. She confronts Toby, finally seeing him for the shallow and superficial person he is, and leaves in tears. Seeking Wesley to talk with him about the date, she finds him at the thinking rock kissing Madison.

Angry with Toby and Wesley, she reunites with Jess and Casey who were genuine friends all along. They, along with her understanding mother Dottie, convince her to go to the homecoming dance with them, in an outfit they create together that incorporates elements of Bianca’s previous wardrobe such as her flannel shirts. At the dance, Bianca, using previous advice from Wesley, tells him that she likes him. However, he informs her that he is back dating Madison. Madison approaches and begins to hurl insults at Bianca. Bianca tells Madison that we are all DUFFs who should be true to our own identities, and her bullying was just a reflection of her own insecurities about herself. Madison is crowned homecoming queen and Wesley is crowned king, but he hesitates and then rejects the title and kisses Bianca in front of the whole school. Bianca’s article about homecoming and her experience is a hit with the students; Bianca is going to attend Northwestern University while Wesley goes to Ohio State. In the end, Bianca and Wesley are still together as a couple.