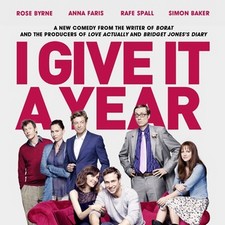 I Give It A Year

Ambitious high-flyer Nat and struggling writer Josh fall in love at first sight at a party. After seven months together they decide to marry. The film highlights their struggles during their first year of marriage, switching back and forth from flashbacks of the year’s action to a marriage-guidance counsellor’s office. Their wedding goes as planned despite many friends’ comments that the marriage will not last, an embarrassing best man’s speech, and a coughing priest.

When Nat returns to work after the honeymoon, she’s embarrassed when Josh calls her in the office, on speakerphone in front of her colleagues, to tell her she is sexy and that he misses her, causing her to abruptly hang up on him. Later, the two meet with their solicitor to discuss how to handle medical crises (last wishes). Nat becomes annoyed when Josh, knowing she would be late, admitted that he deliberately told her the wrong time, causing her to turn up early.

The couple throw a dinner party to use their wedding gifts. Some of their differences are highlighted when they talk about their honeymoon in Morocco; Nat didn’t enjoy the leather museum whereas Josh remembers it as interesting. When the topic changes to Chloe, Josh’s former flame, Nat discovers that the two never officially broke up when Chloe departed to Africa for four years. In the kitchen Chloe apologises to Nat for not realising she didn’t know. The women talk about the constrictions of marriage. Nat’s sister Naomi has issues with her own husband’s annoying habits. Josh’s best man Danny asks Chloe out but is rebuffed.

Nat tries to discourage Josh from accompanying her to a work party but he is determined, irritating her. At the party, he makes a fool of himself with embarrassing dancing and standing next to a poster he can joke about during the night. When he approaches Nat while she’s talking with Guy, she still doesn’t reveal that he is her husband and Guy attempts to shake him off, assuming he’s an unwanted menace. Guy asks her to dinner and Nat declines. Incredibly annoyed at Josh for embarrassing her at the party, she heads home without him.

Josh arrives at a restaurant party that was organised to celebrate his and Nat’s first anniversary and he tells Nat that he thinks she is the perfect wife, just not for him. He asks her for a divorce and she immediately and delightedly agrees. The couple rejoices at the situation and immediately leave the party one after the other.

Meanwhile, Guy and Chloe are at the railway station waiting to go to Paris on a romantic trip. Josh finds them and professes his love for Chloe. When it’s discovered that he split up with Nat, the two are shocked. Nat appears behind Josh, who awkwardly assumed he is the one she wants to speak to, but it turns out she was there for Guy. After a short exchange they happily discuss how perfect Guy and Chloe are for them. In the end, Chloe and Guy mutually break up. Nat ends up kissing Guy and Chloe shares a kiss with Josh.