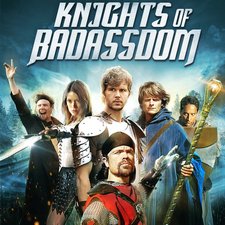 Fun if low budget film packing quite a strong cast including Peter Dinklage at the height of his Game Of Thrones fame.

In a forest, a group of friends are participating in a LARP when their activities are brought to an end by abusive “paintballers”. Their friend Joe Revitt, a slacker, aspiring rockstar, and a fan of metal music, is dumped by his girlfriend Beth. Joe’s friends Eric and Hung bring him unwillingly to a fantasy LARP event to cheer him up. Game master Ronnie Kwok, who was once humiliated by Joe as a result of an embarrassing Dungeons & Dragons incident, demands that Eric cast an advanced regeneration spell to allow Joe into the game. Eric recites a random passage from a grimoire he ordered online to allow Joe into the game, and unknowingly summons a succubus which resembles Beth.

Hung teaches Joe the rules of LARP combat, and Joe begins bonding with a female LARPer named Gwen. She is accompanied by her brutish cousin Gunther, who believes that the LARP event is an actual fantasy world and that he is an actual warrior. After the LARP event begins, the succubus begins murdering LARPers, including Hung and their friend Lando, with Ronnie narrowly escaping. Joe, Eric, Gwen, and Gunther discover the aftermath of the killings, and Ronnie informs Eric that the spell he recited was a genuine Enochian spell that can summon demons. They are confronted by the succubus, and Eric recites a different spell to mortally wound the succubus, but instead causes it to transform into a large monster.

The LARP battle of “Nevermore” is accidentally started early, and the LARPers begin fighting. Amidst the combat, the LARPers are ambushed by the paintballers from much earlier, who proceed to shoot them, scaring some of them away, while others take a stand against them. To make matters worse, the succubus monster suddenly appears and slaughters many of the LARPers, including Ronnie, and the aforementioned paintballers, with Johnny, one of the assistant game masters being the only survivor, due to Gunther’s timely arrival. Joe, Eric, and Gwen arrive to confront the beast, and they manage to pin it in place with the paintballers’ truck. Joe, brandishing a mystical gem taken from the spine of the grimoire, sings a spell in a metal style, causing a spectral version of Hung to appear and defeat the monster. Six months later, Joe and Gwen are shown to have started a doom metal band, vowing to never LARP again, and that Joe has “gotten over” his breakup with Beth. In light of the monster’s rampage, Gunther’s belief that he is an actual warrior is reinforced. Ronnie was posthumously recognized as “game master extraordinaire”, Eric is learning Enochian, having become a “27 level sorcerer”, and Hung’s fight against the monster is now immortalized as legendary.