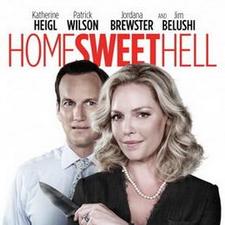 Don Champagne (Patrick Wilson) runs a successful furniture business. His wife Mona (Katherine Heigl) has everything planned according to the book of her goals. One day an attractive young woman named Dusty (Jordana Brewster) applies for the job as a saleswoman at Don’s store. After consulting with his partner Les (Jim Belushi) Don hires Dusty.

Don is desperate because of his poor sex life with his wife. Shortly, Dusty seduces him and they start having an affair. Later, Dusty shows up at the birthday party of Don and Mona’s son Andrew (Aiden Flowers) she tells Don that she is pregnant and wants to keep the baby. Don is desperate and Les advises him to pay Dusty money.

Meanwhile, it is revealed, that Dusty is actually the abused girlfriend of a criminal named Murphy (A.J. Buckley) and she is lying to Don about the pregnancy. Don offers Dusty $13,000, which she refuses, telling Don that it will not be enough. Don is not sure whether Dusty will keep her mouth shut, and Les advises him to tell Mona the truth before she finds it out from Dusty. Don confesses to Mona and she demands that Don kill Dusty.

Murphy is not satisfied with the amount of money, so Dusty calls Don and demands $25,000. Don agrees but instead prepares a poison for Dusty together with Mona. Dusty shows up to take the money and drinks the poisoned drink. Don and Mona put an unconscious Dusty in the car and take her home. Dusty wakes up, so Mona kills her with a hammer. Later she sees Dusty’s body into pieces and buries it in the garden, and reveals to Don that Dusty wasn’t actually pregnant.

Murphy and his friends, Freeman (Kevin McKidd) and Benji (Heath Freeman) discover Dusty is missing, and suspect that something went wrong and attack Les. Murphy also threatens Don by leaving his son a letter, in which he demands a meeting at a strip club. Don meets Murphy and his gang and convinces them that Dusty went to Dallas. Murphy tells Don that she had his money and threatens to rape his family if he does not pay him $20,000 the next day.

Don and Mona dig out the body of Dusty and go to the place where the gang lives. While Mona is trying to hide body parts in the freezer, Freeman comes home with his girlfriend. Mona mortally wounds Freeman, stabs and kills his girlfriend, and shortly calls the police to report a disturbance at the house. Before dying, Freeman calls Murphy and tells him what happened. Murphy and Benji arrive and find Freeman and his girlfriend dead. Murphy also discovers parts of Dusty in the freezer and realizes he has been set up. Soon the police arrive and find Murphy and Benji at the crime scene. The police shoot Benji, while Murphy escapes. The police decide that Murphy and Benji were responsible for the murders.

While alone, Don asks Mona about the reason that she is cold-blooded, and if it was due to her upbringing. Mona threatens to kill him if he asks her that question again. At a house party the next day, Don finds the neighbour’s dog dead in his freezer, and Mona displays very antisocial behaviour with their guests. Afraid, Don stages an accident to kill Mona. After her death, Don and his children move to a new house and are seen in the driveway getting into a new car and driving away. The movie ends with Murphy going after their car. The screen turns black and the end credits roll. Two shots are heard followed by a prolonged honk and children’s screams, indicating that Murphy had killed Don.