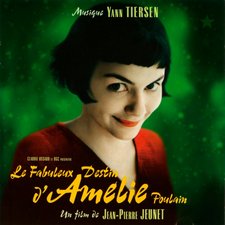 Amélie Poulain is born in June 1974 and brought up by eccentric parents who – incorrectly believing that she has a heart defect – decide to home-school her. To cope with her loneliness, Amélie develops an active imagination and a mischievous personality. When Amélie is six, her mother, Amandine, is killed when a suicidal Canadian tourist jumps from the roof of Notre-Dame de Paris and lands on her. As a result, her father Raphaël withdraws more and more from society. Amélie leaves home at the age of 18 and becomes a waitress at the Café des 2 Moulins in Montmartre, which is staffed and frequented by a collection of eccentrics. She is single and lets her imagination roam freely, finding contentment in simple pleasures like dipping her hand into grain sacks and cracking crème brûlée with a spoon.

On 31 August 1997, startled by the news of the death of Diana, Princess of Wales, Amélie drops a plastic perfume-stopper, which dislodges a wall tile and accidentally reveals an old metal box of childhood memorabilia hidden by a boy who lived in her apartment decades earlier. Amélie resolves to track down the boy and return the box to him. She promises herself that if it makes him happy, she will devote her life to bringing happiness to others.

After asking the apartment’s concierge and several old tenants about the boy’s identity, Amélie meets her reclusive neighbour, Raymond Dufayel, an artist with brittle bone disease who repaints Renoir’s Luncheon of the Boating Party every year. He recalls the boy’s name as “Bretodeau”. Amélie quickly finds the man, Dominique Bretodeau, and surreptitiously gives him the box. Moved to tears by the discovery and the memories it holds, Bretodeau resolves to reconcile with his estranged daughter and the grandson he has never met. Amélie happily embarks on her new mission.

Amélie secretly executes complex schemes that affect the lives of those around her. She escorts a blind man to the Métro station, giving him a rich description of the street scenes he passes. She persuades her father to follow his dream of touring the world by stealing his garden gnome and having a flight attendant friend airmail pictures of it posing with landmarks from all over the world. She starts a romance between her hypochondriacal co-worker Georgette and Joseph, one of the customers in the bar. She convinces Madeleine Wallace, the concierge of her block of flats, that the husband who abandoned her had sent her a final conciliatory love letter just before his accidental death years before. She gaslights Collignon, the nasty greengrocer. Mentally exhausted, Collignon no longer abuses his meek but good-natured assistant Lucien. A delighted Lucien takes charge at the grocery stand.

Mr. Dufayel, having observed Amélie, begins a conversation with her about his painting. Although he has copied the same painting 20 times, he has never quite captured the look of the girl drinking a glass of water. They discuss the meaning of this character, and over several conversations, Amélie begins projecting her loneliness onto the image. Dufayel recognizes this and uses the girl in the painting to push Amélie to examine her attraction to a quirky young man, Nino Quincampoix, who collects the discarded photographs of strangers from passport photo booths. When Amélie bumps into Nino a second time, she realizes she is falling in love with him. He accidentally drops a photo album in the street. Amélie retrieves it.

Amélie plays a cat-and-mouse game with Nino around Paris before returning his treasured album anonymously. After arranging a meeting at the 2 Moulins, Amélie panics and tries to deny her identity. Her co-worker, Gina, concerned for Amélie’s well-being, screens Nino for her; Joseph’s comment about this misleads Amélie to believe she has lost Nino to Gina. It takes Dufayel’s insight to give her the courage to pursue Nino, resulting in a romantic night together and the beginning of a relationship. The film ends as Amélie experiences a moment of happiness she has found for herself.